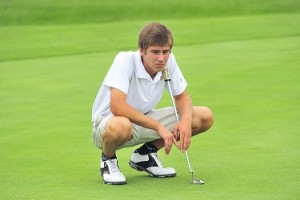 At the turn of Monday’s Pioneer Athletic Conference individual championship golf tournament, Drew Kriebel was struggling.  “I was pretty dreadful on the front nine,” he said.

Kriebel, who missed a couple par putts and registered a few erratic tee shots early in his round, was three over par through six holes.  A bogey on the 10th hole at the Gilbertsville Golf Course put Kriebel, an Upper Perkiomen senior, at four over par.

However, he found his groove down the stretch. He shot par over his final eight holes, and finished in a tie for second place in the tournament six strokes behind Kyle Vance, a sophomore from Methacton.  “Eventually, I knew I was going to loosen up and figure out my swing,” Kriebel said.

The four-over 75 qualified him for the District One Class-AAA tournament, scheduled for Oct. 6-7 at the Turtle Creek Golf Course in Limerick.

A stiff wind and an 8 a.m. start time played a role in Kriebel’s early struggles, according to the coach.

He said that Kriebel playing in the same foursome with the Vance, the eventual champion, figured out by the 12th hole that we wasn’t going to win the tournament.  “So Drew went into par mode,” Brittain said. “He figured a score somewhere in the 70s would get him through to districts.”

Kriebel’s game, which has averaged 36 shots per nine holes, has been a model of consistency this season, according to Brittain.

According to the coach, Kriebel has gone 10-1-1 in matchups with opposing number one players in matches this season for the Indians, including a 208-215 non-league victory over Quakertown on Tuesday.  “Drew has had a great year,” Brittain wrote in an email.

According to the coach, Kriebel’s game should be peaking in preparation for the district tournament. Brittain said the player’s goal will be to make the cut for the first time.

“Turtle Creek is a good golf course that sets up well for Drew’s game,” the coach said. “He should be able to hit a lot of greens (in regulation) there. And when he does that, he makes a lot of pars and birdies.”